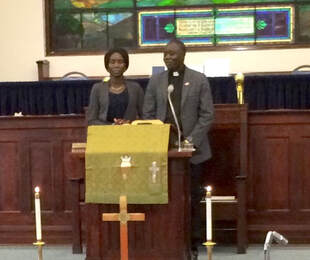 Rev. Owar and Apay Ojulu
New Pastor:​
Owar Ojha Ojulu was approved as the new pastor of the Ebensburg and Colver church on September 22.
He and his wife, Apay, flew to Johnstown from their home in Worthington, MN on Friday, September 20 for a busy 4-day weekend. On Saturday morning they were taken to Colver for a gathering and an opportunity to meet that congregation. They then returned to Ebensburg for another gathering, which was followed by a delicious meal supervised by head cook Robert Bracken, husband of Becky.

On Sunday, Owar preached his candidating sermon at each church. Each service was followed by a congregational meeting which was moderated by Carole Isly Corey as the Presbytery representative. He was overwhelmingly approved as our new minister.

On Tuesday, Owar and Apay, plus representatives from both churches drove to Pine Springs Camp for the September meeting of Presbytery. After lunch, the results of each church were presented, which was followed by a period of questioning of Owar by several ministers. The vote that followed was unanimous in accepting him as a member of the Redstone Presbytery.