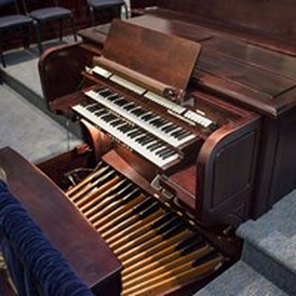 The congregation’s first organ was installed by the M. P. Moller Organ Company of Hagerstown, Maryland. In 1914, Moller added to the number of pipes and built a new tubular pneumatic organ for this new building. The placement high above the floor followed the advice of Dr. Albert Schweitzer, the famous missionary physician, theologian and organ scholar. In 1947, Moller made the mechanism electric. The brilliant trumpet was added in 1976 in honor of Ivan J. McKenrick and W. Hay Williams.

The modern pipe organ includes four families of sounds. The flutes, strings and reeds imitate their orchestral counterparts. The diapasons provide the organ’s unique sound. The range of pitch in an organ can extend up to 11 octaves.

Our organ has 16 ranks of pipes. One rank is either 61 pipes making the same sound or 32 pipes for a pedal rank. The smallest pipes are the size of a pencil.

Pedal Division – played by the feet on its own keyboard! These large pipes provide rich bass sound. The largest are wooden boxed-columns 10 inches square and 10 feet long placed horizontally underneath the choir loft. We sometimes feel the sound as well as hear it.

Swell Division – meaning to enlarge or grow. These pipes are enclosed in a huge insulated box. Shutters, controlled by what looks like an automobile accelerator pedal open, allowing the sound to expand or soften. It is behind the pipes to the left.

Great Division – meaning the principle or most important. It is placed behind the pipes on the right. Several of these large exposed pipes actually sound. The fiery French trumpet stop here was added in 1976.

Echo Division – located behind the balcony on the left. An enclosed box with shutters.

Console – The nerve center of the organ is located behind the pulpit. It has two 61-note keyboards. On the floor is a 32 note pedal board played by the feet. When a key is pressed, an electric signal is sent through a wire to open up the wind to that pipe(s).

Blower – located in the basement, it electrically provides air to windchests under the ranks of pipes.
The Organ as an Instrument
The earliest humans delighted in making sounds with hollow reeds and animal horns. As far back as 265 BC the first keyboard instrument, the “hydraulis organ”, sustained the sounds by the use of water to stabilize wind pressure. Later air bellows were used. By 1361 a large organ in Germany had 20 bellows pumped by 10 men.

Created by the cooperation of artisans skilled in leather, wood, metallurgy and physics, the organ was the most complex mechanical device until the invention of the steam locomotive. Organ builders also developed forerunners of computer technology to pre-set registrations.

No other single instrument can equal the organ in versatility and quantity of sound. Mozart called it the “King of Instruments”.

​Our word organ comes from the Greek, ergon…meaning energy, work, instrument for working. One derivation of the term “organize” came from the way an organist must play keyboards with both hands and both feet while adjusting the buttons/tabs/knobs that open the wind to the pipes. No wonder Beethoven wrote that an accomplished organist is the greatest of virtuosos.